The 30 Day Spell was a spell used in the Briarverse during the Search for Magiq narrative.

The 30 Day Spell was discovered by SpiritSeer, who saw it posted to the Low, where it was flagged for its use of “magiq” with a “q”. It appeared similar to other 30-day social media challenges, where each day was attributed with a different phrase. The original post came from the friend of someone whose daughter left the image behind before running away.

To cast the spell, the Mountaineers had to create something based on each of the phrases per day, be it a piece of writing, art, or music. As they continued posting their interpretations throughout the month of April 2019, they began receiving communications from an Instagram account called @thesearchformagiq, from someone claiming to be a representative of the Sanctuary. Later, it was discovered that anyone who wished to come in contact with the Sanctuary had to cast the 30 Day spell first. 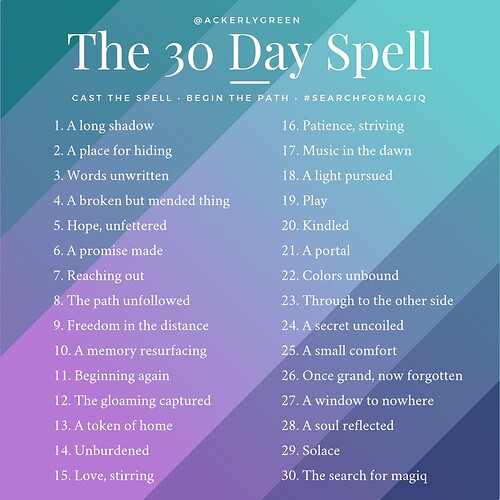