The Book We Write

I remember sometime last year seeing something about the Monarch Papers. I was intrigued, but was starting my second season at my new-ish job, so I figured I’d try looking into it later.

Then I saw it again, and this time saved the link to look into once the season was over (or at least had calmed down some).

I finally got through the worst of the season, and during one of my “summer” shifts the Monarch Papers came up yet again, reminding me of that link I had saved and driving me to finally use that time to look into it.

Of course by that point, the Book of Briars had become a bit…crispy (I was the one that started calling you crispy, I think I’m sorry about that).

I used that lull while everyone that was already here figured out what was going on with the third assessment to try catching up on the twelve fragments and two assessments I had missed. The videos for 1-8 helped immensely, and I kind of gave up on reading through 9-12 to my satisfaction when I saw just how long they were.

I tried looking up constellations and celestial bodies that could have something to do with the assessment until the list in the Lost Athenaeum was discovered. Then I threw myself into helping locate where all of these things could be, trying to map things out when I had desk shifts.

We managed to get into the site that was standing in for you (BoB) and eventually got hold of the Mounties helping you in the '90s.

It was during our time helping the other Mounties with fragment 13 that I truly felt the magiq. When I got the weaved strips to give us the instructions, my hands began to shake. I was so amped up I was vibrating and trying not to be too noticeable about it so the ushers wouldn’t ask.

Never did I imagine that I would communicate through dreams with someone in the past, inadvertently assisting in the creation of an earworm that would rival the Rick Roll (if you happen to see this @Benefactor sorry about that).

I was inspired to design some bookmarks out of the guild logos (and tried doing a Chronocompass one), and got one of them stitched. It will take too long for me to get all of them right, but here’s a picture of the one I have done (mostly, I need to make the waves stick out more). 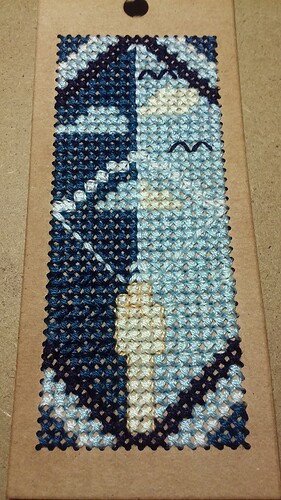