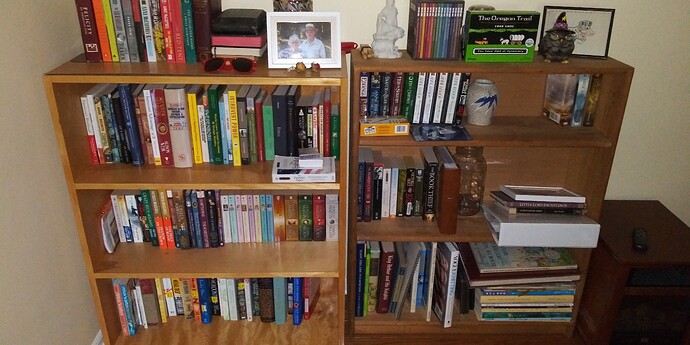 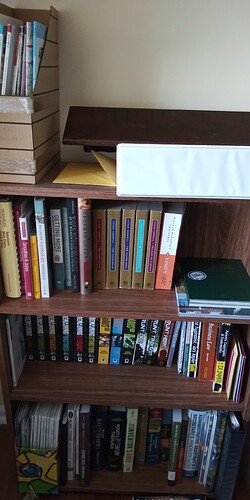 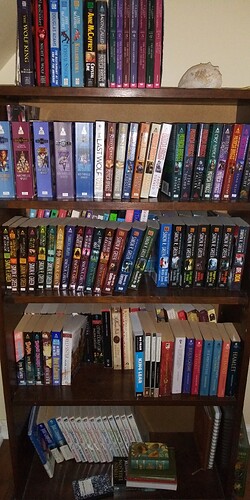 I greatly appreciate this threads play on words 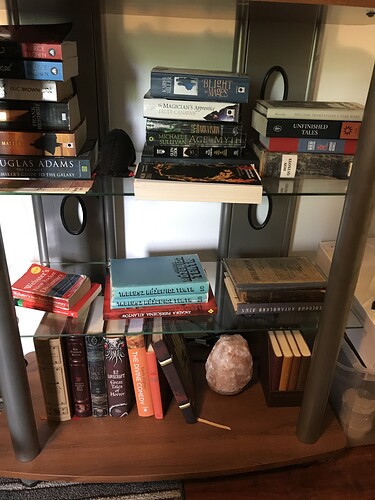 Your shelves are making me jealous! 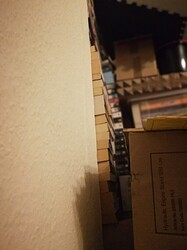 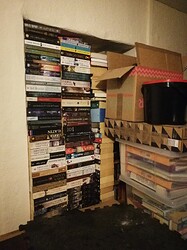 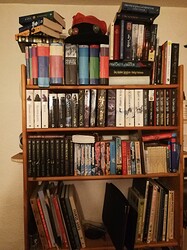 I can see book 5 of the series I’m debating reading next, but book 1 is buried somewhere in/behind the visible stacks.

This is why I put all my series together when I packed to move here.

Tomorrow hopefully ill have time to post a picture of my shelf! Question should I leave my refill medical supplies for the picture or would you guys care if I just left them? 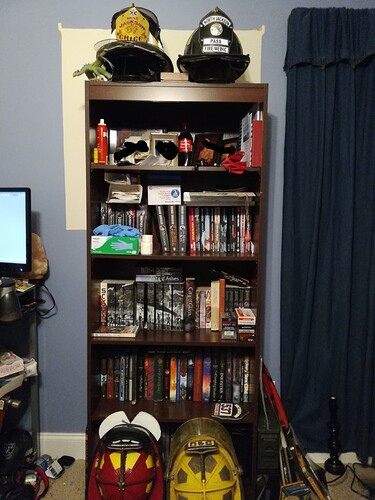 The people in the pictures on my shelf said they’d rather not be shown even though you can’t see any facial features from that distance anyway.

I also just noticed that I never did get around to painting the white outline behind where my sisters bookcase was, whoops.

I’m sure you guys noticed entire top shelf is dedicated to mementos. The second from the top is a mess. Third is still a mess. The fourth is rather clean.

Those fire helmets each have a special meaning which if anyone wishes I can go into depth at another point.

Alright! They were actually all my fathers which play into the special meanings.

The white one (top left) was the one he received after becoming the youngest paid fire chief in the state of Georgia!

The black one (top right) is the one that I was given at his burial. It has our last name as well as his job in the fire department. Fire/Medic if you can’t read it, its kind of blurry whoops.

The red one (bottom left) honestly was just too pretty to go into a box/red is also my family’s favorite color pretty much.

The yellow one (bottom right) was the one he last used/the one he would take on a call out. It actually is still covered in ash but I refuse to clean it and leave it as is.

They also all individually and collectively remind me of just how brave people are. Like yeah I want to go get shot at and try and patch people up as a combat medic but these guys run into a burning building where there might not even be someone in danger. They run in where they might never run back out. I have to give them tons of respect. (Dang this got kind of depressing and a little morbid towards the end, whoops.) Also I think these were the stories you asked for, if not it was the mementos… which I might have completely glossed over.

They were packed for moving by series, some ended up across 2 boxes but I also catalogued each of the boxes so I could find a specific book if I wanted.

Since unpacking, they’ve got jumbled and are only sorted by size.
They’ve been stacked and moved and restacked and moved, etc… sometimes by me but also by my partner and builders who just see a pile of books.

I’m looking forward to the house being sutiably sorted that I can make my library with a floor to ceiling set of shelves the full length of the wall. It’ll go over the nook my books are currently in, giving me deep shelves for maps and larger books. It’ll also go over the door into the room, so will have hidden door in the shelves.
1 shelf will be dedicated to model railway capable fo carrying a cuppa tea on its wagons, models, lego technic and probably a couple dragons. All the other shelves will be dedicated to books.
There will be a small section at the end that joins onto a hip height shelf running across the next wall. It will have cusioning and a little lantern, so you can sit in the shelf and read.
The hip height shelf will have a hidden projector screen and join to shelves at the other end that have a fold out drafting desk built into it.

Oh the dream image of my future shelfie! Next year maybe?

This is one of several bookshelves in my house but this one is my personal shelf!

I don’t have any bookshelves, sadly. I have many large piles of books scattered around my living space, but no shelf for them to call home as of yet. This is weird only because I’m a Thornmouth and should be tending the library… I swear that the chaos here has some kind of order to it!

Totally unrelated to books, but what’s that black thing by the window in the floor?

@Ignatius it looks like you’re a division agent with the helemets, the medic bag and the gloves

That’s a great call! More from the first game than the second, but I totally see it!

Also, I totally think that’s a lamp. My eyes like to play tricks on me lol

I’ve been dying to post here, but believe it or not, haven’t had a free minute to take pictures of my bookshelves

Anyway, we have a bunch of different bookshelves in our home. The main one is in our office/guest room: 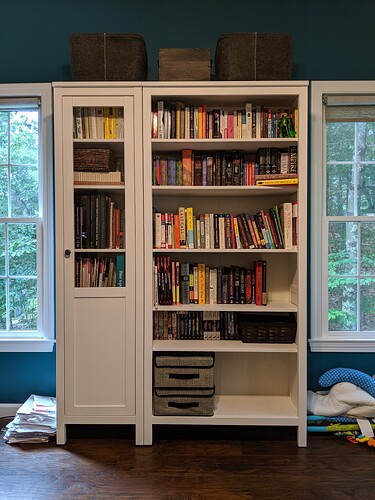 . I planning on bringing some classics up from my old room at my parents’ house and re-stocking soon.

But we actually have a bunch more in our kitchen! 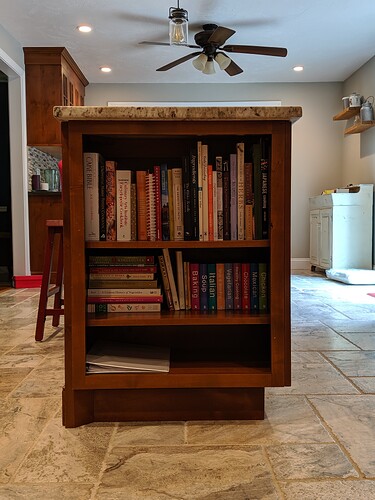 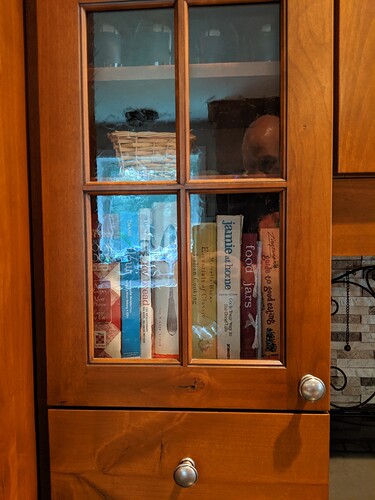 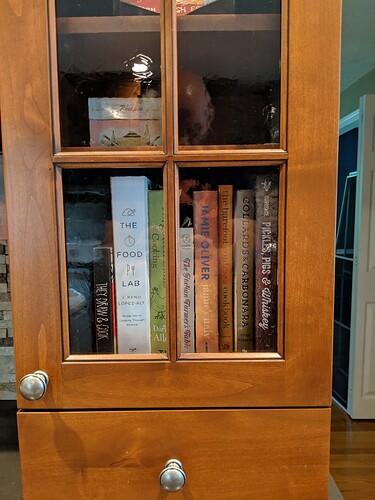 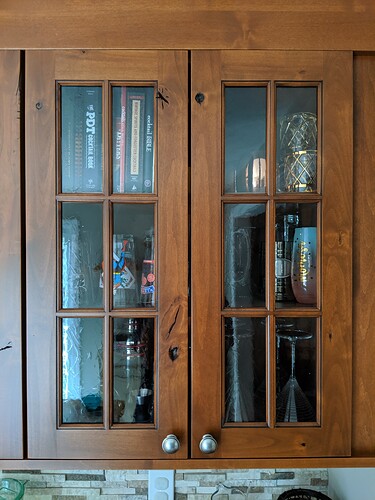 We have some big built-ins in our family room, but they’re most taken up by board games, baskets of DVD’s and Lego creations. There are a couple devoted to children’s books, for easy access: 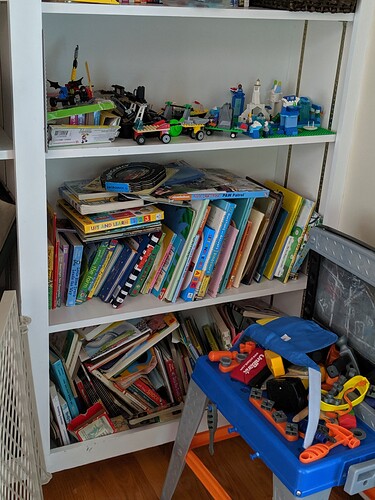 This thread is so fun! Thanks for sharing, everybody!

Came down to my childhood home for the weekend. Managed to nab a pic of the bookshelves in my old room. 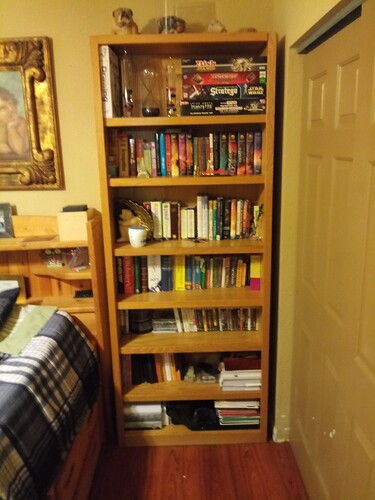 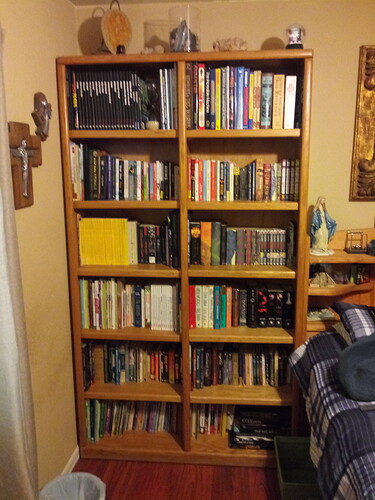 I finally took pictures of my book storage.

…and realized how long it’s been since I’ve dusted, so I’ll be taking new shelfies once they’re in a less embarrassing state.