In honor of recently listening to Harry Potter and the Sorcerer’s Stone on audiobook (which is currently available for free on Libby!), this week, I spent a whole workday afternoon sorting all of our Harry Potter faves into their Briarverse guilds, because why not.

Please note that this is all pure speculation on my part—I did not take the Magiq Guide assessment 12 individual times pretending to answer as each character (although I definitely thought about it, I’m not quite so desperate to pass the time . . . yet).

So! Without further ado, here is my list of sorted characters:

I mean, obviously. Hermione is the most Thornmouthy Thornmouth of all time. Not only is this girl above and beyond devoted to education and learning, but her nose also never stays in a book for too long. Hermione’s all about putting that scholarship to practice by taking what she’s learned and using it to actually do some good in the world. If she happens to teach others a thing or two along the way, all the better. A Thornmouth queen if I’ve ever seen one.

And he’ll never let you forget it. No hate to Ebbies, but if any guild was going to give off a “Chosen One” vibe, it would be Ebenguard. Yes, Harry is brave, kind, and loyal to a fault, but one thing I can’t help but notice while reading/watching/listening to the series back as an adult is how many problems Harry could have avoided if he had simply gone to a trusted adult first! But no, Harry sees it as his own personal duty to take on the biggest bad he can find at all times. I like to think that as an adult, those are exactly the qualities that made him an awesome Auror, once all that teen angst finally burned off.

You couldn’t ask for a better sidekick than a Weatherwatcher. They’re always down for an adventure, whether it’s traipsing around the castle at night under an invisibility cloak or taking on a fully-grown mountain troll at the ripe old age of eleven. Ron takes everything in stride and is able to adapt himself to almost any situation, facing his fears head-on, and has more than once saved Harry’s butt with a creative solution. Not to mention, he would LOVE the unofficial Weatherwatch maroon.

Oh, Neville, how we love you. Neville is an Ebenguard for the same reason he was a Gryffindor when everyone expected him to be in Hufflepuff: for his strength of character, strong principles, and his willingness to fight for those he loves and for what he believes in. Neville’s been a hero since book one (and with way less of a hero complex than Harry). He’s the perfect example of how you don’t need to be constantly performing grand gestures or fighting villains to make the world a better place—you just have to be a friend when it counts.

Luna is so in tune with everything going on around her that she often appears to be operating on a different frequency entirely. While not everyone gets her, Luna never lets that diminish her shine. She doesn’t let anyone change who she is and she doesn’t say I told you so (even though she’s right almost as often as Hermione), and by being exactly herself and no one else, she finds her people. Luna is who you want beside you whether you’re watching a Quidditch match or facing down a dark wizard. Her courage is matched only by her love for her friends, which is a very Gossmere attribute.

I think there’s an argument that can be made for Dumbledore as just about any guild (Thornmouth is definitely a contender I would hear an argument for), but at the end of the day, he’s an Ebenguard through and through. Much like Hermione, his immense wisdom confers an overwhelming sense of practical duty that definitely gets passed onto his Ebbie protégé, causing more than a few existential crises along the way. Also, *spoiler alert*, sacrificing yourself for the greater good is basically a one-way ticket to Ebenrest.

Another potentially contentious one, but is there anything more Flinterforge than potion-making? And yes, I know, it was Defense Against the Dark Arts he always wanted, but let’s face it. This guy was exceptionally talented at potions. Remember how well Harry started performing in class when he had Snape’s old textbook in Half-Blood Prince? And it wasn’t just potions he was experimenting with, but spells, too (just not always for the better). Snape had a strong Flinter creative streak that went sadly underappreciated and underutilized at Hogwarts. #JusticeForSnape

At first, Draco didn’t seem to fit anywhere, especially not in Ebenguard if that was where I’d already decided Dumbledore, Harry, AND Neville were going to go…and then I realized, that was exactly where Draco needed to be. I mean, can you imagine how rattled Harry would be every time he was reminded that he shared a guild with his school enemy?? Or how annoyed Draco would be that he shared a guild with Neville?? And yet, Draco definitely has his own sense of honor, duty, loyalty, and justice that would make him a model Ebenguard. Ebenguard is the guild of balance, but that doesn’t mean the scales don’t sometimes tip the other way.

Let’s all get this one thing straight first: the movies did not do this girl justice. Ginny is the coolest and always will be. She’s as confident in class as she is on a broom, and is also not afraid to spontaneously throw out a Bat-Bogey Hex if you get on her nerves. Much like her older brothers, she’s always up for a bit of fun and never takes things too seriously, but if you get between her and someone she loves, watch out.

This lady literally transforms herself and her surroundings for a living. Need I remind you about the time she brought an entire army of stone soldiers to life?? She’s so obviously Flinter it hurts. Not accepting questions at this time.

I was super on the fence about this one because one thing we’ve always been really careful about is not making any one guild the “evil” guild, like how Slytherin is the stereotypically “evil” house. So think of Voldy as more of an anti-Balimora: he’s chaos incarnate, but not in the cool way. The cleverness and curiosity are there, but the respect for the natural world most certainly isn’t. He takes all of the beauty of Balimora and perverts it to his will, bending laws of nature and magic in ways they were never meant to be bent, fostering an environment of chaos and uncertainty that leads to dread instead of the natural default of Balimora, which is hope. Voldemort is the definition of a bad seed, but remember that he’s just one among many perfectly lovely, non-evil Balimorans.

A total gimme and a perfect example of a non-evil Balimoran. Even before he became the Care of Magical Creatures professor, this guy’s whole world was, well, the natural world. Have you ever heard of a more Balimora thing than attempting to raise a baby dragon in a one-room wooden hut? Hagrid’s list of questionable pets could fill a blog post in itself, but at the end of the day, it’s just because he has the biggest heart of anyone in this series. Hagrid would personally care for every living thing in Hogwarts if he could, and he would consider it an honor.

Don’t agree with me? Change my mind!👇

Pro tip: the actual article on the blog has GIFs!!!

I did a little html wizardry, and Giftotum Locomotor! 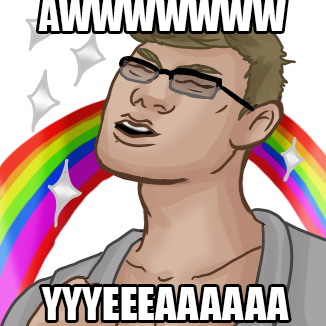 he would LOVE the unofficial Weatherwatch maroon

He totally would, even though it would clash with his hair

I think these are really well thought out and I like how these help to showcase the nuance in each guild (especially those Ebbies). Also, I love the Weasleys’s so having both Ron AND Ginny in my guild makes me feel pretty cool

Yes!! I don’t think all of the Weasleys would be Weatherwatchers–Fred and George definitely have a strong Balimora streak, for example, but Ginny and Ron together felt right.

That GIF of skipping Voldy!

I actually really like Draco’s placement as an Ebenguard. All the guilds have their shadow sides, after all, just like all the Hogwarts Houses do (and Slytherin just happens to have been superceded by its shadow). If you grow up being taught a skewed notion of balance and order, and that the only way to have any worth is to defend that skewed notion of balance and order…you pretty much get Draco. Same for Voldemort…he studies the Chaos so he can break it and make it serve him, not so he can understand it.

Have you ever heard of a more Balimora thing than attempting to raise a baby dragon in a one-room wooden hut?

Hagrid’s adoration of “monstrous” critters that everyone else finds uncomfortable is what made me love him. I was a little girl who liked snakes and frogs and mantises, and was thought “weird” for it so I related very strongly to Hagrid. Blast-ended Skrewts are misunderstood, and flobberworms–while admittedly sedentary–are a vital part of the ecosystem!

If I may, I would like to put forth that we claim Peeves and the Weasley twins for Balimora. The twins could also be Flinters, but given how they use their skills and inventions, and their Campaign of Chaos against Umbridge and general poking of rules, I think they’d fit in.

If I may, I would like to put forth that we claim Peeves and the Weasley twins for Balimora.

Oh, TOTALLY. Especially in the later books when their entrepreneurial side comes out I could see a Flinter side, but I feel like “Campaign of Chaos” is also just more of a life motto for those two and for that they are forever Balimorans in my book.

@AG_Catherine, you have totally made my day, thank you. When I first found the Briarverse, I took the Assessment and was put in Thornmouth which totally fits me to a T.

It took about 6 months to finish TMP: F&F, so I took the assessment again and was put in Ebenguard. I still sometimes wonder, even taking the assessment about a half dozen more times because it doesn’t always feel right.

I started feeling it this past weekend when I was at a section of the MA coast which is very rocky (I hate the beach, but LOVE rocky coasts, which I always forget because no one else likes them) and realized that the Tide isn’t just at sandy beaches. Now, you’ve suggested Neville is an Ebbie and I get it, I TOTALLY get it!

Molly Weasley is Gossmere. You can’t change my mind.

I’m deeply conflicted right now. As a Balimoran, I’m happy we have Hagrid. In the other hand, we have Voldemort.
If we don’t have the Weasley twins, I call all Balimorans to riot.

Now, you’ve suggested Neville is an Ebbie and I get it, I TOTALLY get it!

I’m so glad it resonated with you!!