For the Book, Who Has Given Me So Much

The Reading Room The Monarch Papers Archive Fragment 16 - Letters to The Book of Briars
campfire, fragment16, magiq
Tinker September 29, 2017, 6:22am #1

I think, in a way, I have always believed in magic. The first star of the evening, lucky charms…things that most people would dismiss as superstition. But also the big things - the kind of magic that changes the world…though perhaps I kept that one to myself. As I grew, I learned to find the magic in the ordinary - a scent that brings you back through time to a memory, the way a color can lift your whole mood, the magic of simply building something…it’s all around you if you look hard enough.

But something was always missing. Until one night. I should have been working, or I should have been going to sleep. But I wasn’t doing either of those. Instead, I was completing the Guide to Magiq. At first, I didn’t know what to make of it - maybe it was a prank or a joke. So I get my results - Balimora - and it just didn’t feel like me. But I was curious still, so I found my way to the forums. I was coming in right at the very start of Assessment Three. I’d missed twelve fragments and two assessments and I felt so behind. I considered just walking away, but something in me had to know more. So I powered through the weekly wrap ups and I was well and truly hooked. I got my head together and redid the Guide…a little more seriously this time. And now, I was placed in Flinterforge and immediately a sense of real belonging washed over me. I hadn’t met any of my guild members yet, but I knew I’d found the right place.

The next morning, it began for real. I jumped into the work, matching previously-unknown-to-me stars from constellations I’d never heard of to cities and landmarks, searching through history for just the right clue. I learned things about this world that I’d never stopped to think about before, while also learning about magiq and all it had to offer. I was there the day we cracked the assessment, and when we reached through time to three separate predecessors to patch together the tragedy of the 94s. I felt a real connection to our nightmare buddy, and a deep respect for the sacrifices that got us where we are.

I was there for Deidre and Cole, running around New York at a moment’s notice to find clues, knocking into Neithernor for the first time, hiding from the Storm, being so incredibly brave. Watching them put their all into this amazing journey gave me the strength to keep moving. And now I’ve done magiq. I lit my lantern, joined my friends, and called the Storm…a little nervous perhaps but so ready to put up a fight. I found strength from our friends returning - getting to meet them for the first time…and hopefully make them proud. I saw a hero named, and wrongs put right. I saw the bittersweet end of one path, and now, dear book, we get ready for another bittersweet end. But in this goodbye, there is also a bright and shining hello.

So, Book of Briars. This is really our first time meeting - I came to this party after the book of my time was destroyed. And yet, I owe you so much. You gave me more magic (or magiq) than I ever could have dreamed possible. But more than that, you gave me a family in the form of the Mountaineers. I have worked so closely with these people that I’ve never actually met, and we have such a strong bond. From late night riddles, to spells, to jokes in times where maybe jokes weren’t the most appropriate. But I know they’ve got my back and I’ve got theirs.

So thank you. For all you’ve done for me, and all that you are about to do. Because I know you have it in you. You put your faith in us, and now it’s time for us to put our faith back in you. It’s been a long road, but we’re almost home. I trust the flow of magiq, and I trust you. 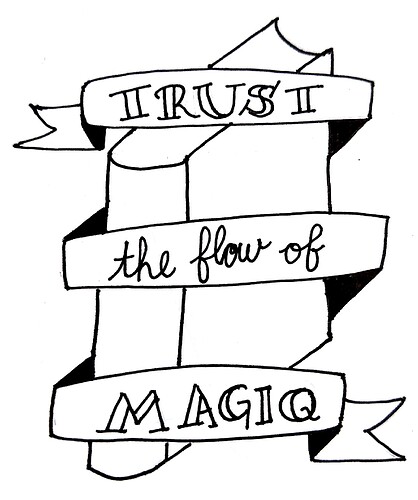