RIGHT. Cracks every finger in my hands

Im a dungeon master, running 5th edition dnd. I just noticed someone else here plays, so now i GOTTA start this. What are some crazy stories about your own personal dnd characters, or even a general description?

Tal is a dubiously aged harpy with turquoise blue hair and a green poncho who carries a 4 metre tall bow, and a quiver of 15 inch long arrows. He is a former airship pilot, turned sailor, turned merchant, turned mercenary, that has a life dark and mysterious. He acts kind and happy, a positive ball of joy, but he will not discuss his past with ANYONE, and acts very differently when caught alone.

As for his mechanical stats, he is from a system that is a heavy modified version of stars without number, and he uses sniper stats, with the rather fun distinction of being able to fire the incredibly large bow he carries basically without penalty from any distance due to his incredibly accute eyesight and hearing.

He is a member of the organization known as The Zaddashund pathfinders, A group of harpy mercenaries dedicated to watching the roadways of their homeland, a cracked and blistered highland, thousands of miles above water level composed of cracked mountains and destroyed bluffs, where an endless wind tears its way through the land.

My DnD experience is limited and mainly DMing(also 5e). So, I don’t really have much to share yet, but I wanted to express my interest in the topic.

hmhm! always good to at least poke it, so you can get updates.

I did see an interesting character concept that I was exploring and making for myself though. It was a rogue that didn’t stealth his way through things but rather intimidated enemies into silence.

Ah, yeah, ive actually seen that concept used before with a cavalier in pathfinder. It was glorious. He had a stealth of +7, but he literally just rode up to people on a warhorse with his lance and told them “if you mention i was here, i will hunt you down”

My first time at dnd I played 3.5e Pathfinder Campaign. My DM and I collaborated to create a character we both thought was fitting for my personality.

A Tiefling Chronomancer Sorcerer. Certainly difficult to play for a first time, but it was a lot of fun while it lasted.

His name was Zoradius, his background was relatively unknown but had grown up and apprenticed under Dramidj one of the only known Chronomancers.

Unfortunately some time into our game there was a bit of a ‘roll of the dice’ fluke and we ended up looting an exhorborant amount of money in the form of a very large and very priceless gem. It started snowballing into a shopping trip and our equipment was rather over powered for how low level we were.

But Zoradius always felt like a counter part to me. Half demon time sorcerer and played him as such.

Do either of you follow any DnD shows/podcasts? I watch Critical Role and listened to The Adventure Zone.

Ooo. Chronomancy is SUCH a cool subclass in dnd. So underutilized, too.

Ive also run my own live show, though it didnt get many followers.

Ya Chronomancy is super neato, probably underutilized because it’s a challenging class to play. For the player and the DM. Screwing with time can become a headache

Right? My sorceror i played last was gravity based homebrew. THAT was awesome. All spells she casted pushed or pulled enemies, knocked them prone, or distorted them. Add on tons of damage and dimension door trickery, and it was brilliant. To top it off, when i rolled for race, i got a homebrew that could heal pcs as a racial trait, scaling with her level. She was a pirate. It was great. 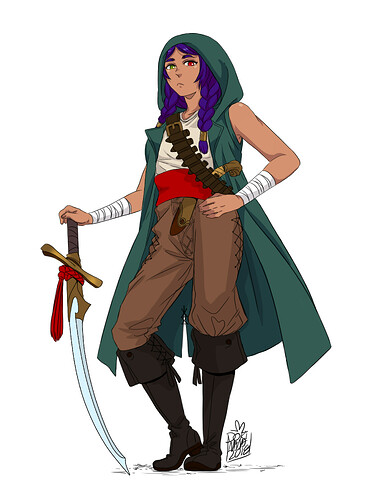 Okay, this is gonna take some explaining but, there’s a story that my old D&D group would tell any incoming players new to tabletop gaming about me. As a warning to how committed I was to playing my characters as accurately as I could and how ruthless I could be as a roleplayer.

So back in 3.5 I was in a game that lasted for a couple years, playing once a week for several hours. There were 3 of us and a DM. The DM made characters for each of us to start the game as and gave each of us a quirk. I grabbed the spellcaster (half-elf sorceror), and was told I was -obsessed with magical items-. That is very important.

Fast forward a long time (We were level 6 or 7, we ended the game at level 9) and that sorceror was the only one of the three starting characters still alive, though the DM had let me class change to shadowcaster cause we got Tome of Magic during it and it -fit- the character well. Regardless, my character has been burned a lot and has developed some pretty serious trust issues, and we have no healer in the party. Our ranger is currently carrying the wand of healing and our group has swelled to 5 players and a DM at this point.

SO, with all that set, we get into this encounter against some very large bugs. One of them grapples my character and tries to take off and the fighter literally jumps up and grabs me to ground me. So I’m good. Next round they grab the ranger and start to take off. Everyone else is otherwise too far or preoccupied to help so I’m trying to figure out how to resolve this situation. The DM helpfully pipes up “He has your only wand of healing”.

I look at him like “Oh yeah you’re right.” followed by “I cast Umbral Hand (stronger Mage Hand) on the Wand of Healing”.

There is dead silence at the table and a thousand yard stare fixated on me as I grin like a lunatic. About a minute later the DM says “Okay, you take the wand.”

Another turn goes around and it comes back to me.

DM: “Well the ranger is out of reach now, anything you can do to help him?”

Me: “Nope, but I’m gonna cast Umbral Hand and take his quiver of magic arrows too.”

And this is how all new players got told that I will loot them before they died if given the chance and the reasoning.

Gravity? Was it a type of psionic ability orrrr?

Homebrew is where it’s at. I haven’t spent enough time playing dnd unfortunately but I do play out scenarios based on memes, homebrew creations and items posted on the inter webs.

Interestingly enough, I was in the process of developing a game that was based off of dnd but brought it to the real world - an interactive story, much like what is going on here.

Points for staying in character…? Lol

At this point everyone in that game recognizes it as a really funny story and one that makes sense for the character. About a year after that game ended I realized he wasn’t Chaotic Neutral like his sheet said. He’d made a slow descent to Neutral Evil. And has a ton of stories about his nonsense.

Ah, no, so devanni saar was like… a privateer. An illegal pirate. She got caught in an accident doing gem smuggling, and fell into a crate, breaking it open and exposing this ruby rose. When she tried to collect it, it tore her eye out and replaced it with itself. It wasnt sentient, but she became suddenly connected to the astral realm, a bit. It led to her being kicked out of her crew (pirates need to blend in, in this setting or they’re executed on sight) and eventually she only really used it for stealing, which she did the day she bumped into a certain master magi who ended up taking her under his wing. Time went on, things progressed, and that mana manifested in an ability to tear rips in spacetime. Pretty sick stuff imo.

That. Is an amazing backstory.

A sentient ruby rose that replaced her eye. Brilliant. Ahhhh, I see now in the picture, one of her eyes is red.

I bet she was a blast to play.

She was lawful evil at worst, chaotic neutral at best. It was a BLAST.

Man, id like all these comments, but i ran out of likes for the day. Guess ill do it tomorrow.