That’s essentially my retirement plan. We already have a flock of chickens - in fact, we’re getting new baby chicks on May 5th! I’ll post some photos!

It’s less my dream and more my wife’s, but as a practical person I can’t deny the utility of raising chickens. Our newest chicks are coming the first week of May too.

the lesbians will find it and they will yearn

It’s what we do best. Any kind of domestic simplicity is like a lesbian magnet but that self-sustainable nature-based cottagecore vibe is just so dreamy

I will say, it’s wonderful to have a friend group where things are basically assumed queer until indicated otherwise. Since we don’t get to have that freedom in so many other contexts, it’s so so lovely to have our little bubble where there’s absolutely no pressure or expectation of anything else.

From The Onion (and Me):

I gave my daughter the complete Calvin and Hobbes collection and she’s instantly in love, just like I was around her age.

She said, “When I have children, I want to give this to them.” and though having children is her choice and I don’t care what she does with her life as long as she’s happy, also, OMG, am dead.

I still have one Calvin and Hobbes book that I can’t let go of.

So, some of you might know that we were looking for a second dog after our boy Luca died last year. We nearly adopted a sweetheart named Whiskey, who I loved with my whole heart, but who ended up not being right for us, and needed more work before he was ready to find his family.

Well, he did. Whiskey was adopted last month!

And that makes us really happy. So, with Whiskey in his forever home, and us being here in the country for the foreseeable future, we started thinking about second pups again.

On the anniversary of Luca’s death last week, Matty’s old friend (who’s a dog trainer in NYC) posted a photo of a puppy she’s fostering, and we don’t know why (we weren’t looking for a puppy) we just instantly knew he was our guy.

We felt like Luca picked him out for us.

The kids always give our dogs their middle names. We had Luca Sunshine Bernstein, and Ruby Rainbow Bernstein.

And I’m leaving in an hour or so to go pick up this beautiful boy: 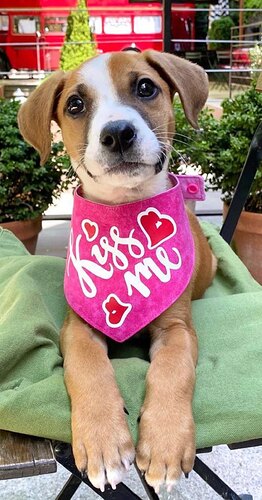 I mean, isn’t Schnitzel the best middle name for this guy?
And Whiskey, cause even though he found another family, I’m going to love that pupper forever.

That boy is adorable!!!

I have never met him, but I love Henry Schnitzel Whiskey Bernstein with my whole heart.

What a cutie!! Give him all the mountie kisses for us

A four hour round trip drive and we’re both exhausted but we’re back home, safe and sound, and we’re both about to nap. (I had a mask on, it was just around my neck for a strictly social distanced minute of puppy kisses.) 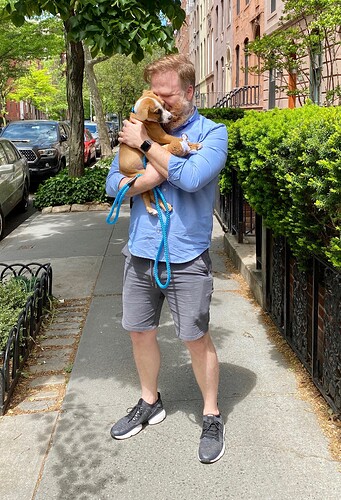 Also, I work hard for legs that white.

Aww I’m so happy you finally found your dog! He looks so sweet! And most of the dogs I’ve had happen that way too, when I least expect it, but it feels right anyway. I hope he settles in well

What an adorable picture!

I have this wonderful memory of traveling to Scotland as a kid. A waitress in a restaurant—a motherly type woman—complimented my red hair and leaned over with half a wink.