First, I barely got anything done this week, hoping every creak of the office was the ghost come back. Also, I feel bad calling him “the ghost.” I’ve taken to calling him Woolie (in my head) after The Path of Wool. Any objections?

By Friday I’d overnighted books on summoning spirits from Amazon. Then this afternoon happened. I saw something out of the corner of my eye. It was Woolie. Sitting on the floor behind me. Still out of focus and only indirectly visible. Still mustachioed and… becoated? But now… He was soaking wet. He started talking and I missed the first part—

S: Do you mind if I type this? I don’t have the best memory and—

I put the keyboard in my lap and just started typing as he wrote.

W: …finally a parley had been agreed upon. It was decided that an assembly of house leaders would await them at the eastern shore at the dawn of Assembler’s Day. But they never meant to parley. They came as night fell on Assembler’s Eve. I stood at the watch. Was trusted as the first sight. I looked across the cold and silver swirling sea. I was the one who first saw them coming. I was the one who knew. And saw it all begin. I saw them, carried by wing, and wind, and blood-black sails. I was trusted as the first sight, but I stood, watching, unable to move, unable to speak. Unable to sound the cry. I failed. Frozen there as a great black wave of water rose up, obscuring their envoy, and laying waste to the house leaders who made camp on the shores. I watched them fall from sight beneath the mouth of the sea, the ice brine reaching up to the tower, and then the final silence fell up on me.

S: Is that the last thing you remember?
W: The black wave filled my chest. It drew me from the watch. There was no up or down. Only cold and dark and then… and then I cannot say. But then there was a light. And I followed it. Not swimming nor walking. I was willing myself after it. And then I was here.

He looked up at me and I realized it had become easier for me to see him. The spectral water that ran off him pooled around one of my shoes. I could see it wasn’t “real.” But I could see it.

W: The message you found was part of my memory. Part of what I lost. You made me remember that.
S: I’m so sorry.
W: No, you can help me. Help me to remember.
S: Is that what you want?
W: I am lost. And you found a part of me. Perhaps you could find more. To tell me who I am.
S: We’ll do whatever we can to help you.
W: There are… shards left in my new memory. Small pieces that don’t belong there. I think they might belong to you and your friends.

And then he started reciting a poem and I hope to God I got it right.

That is all that you need For the first memory

He vanished before his voice did and by the end it was barely a whisper. I think that’s it, but I don’t know.

So, to recap… the Secret Society pin led me back to the warehouse. At the warehouse, the apparently enchanted app sent me a message. But it wasn’t just a message. It was apparently a trigger or an actual piece of Woolie’s memory. Was the app sending the memory, or what the memory lost there, in the warehouse, and the app just a conduit for us to read it? And what are we supposed to do with the poem?

The pin started this. It has to have some kind of connection. Maybe even to the poem. Does any of it sound familiar Mounties? Particularly the members of the Secret Society?

20 Likes
I've Been Gone Since :insert date here:. Where Do I Start?
18. The Secret Society: Down to City Hall Station
The Founders of Neithernor
Neithernor Reborn: Ebenrest Awakens
2. The Search For Magiq: The Neithercouriers
Tinker April 2, 2018, 10:13pm #2

But for real tho…question. Is there a reason why some of those are in italics? Did he say them with a different intonation or something?

FINALLY!
ok, so im drawing a blank, but ill look into each term and see what I can dig up

EDIT: A brush with the law
As she spoke in a tree

could be castle of vines?

So this might not be anything, but some of the lines in the first stanza seem to have a topic match in the second?

a clock, a union of time
a courthouse, a brush with the law
a tower, a romanesque lure (romanesque is an architecture style)

It’s not all of them, so it might be a coincidence…but that jumped out at me…

did the silver control the waves?

Figures that all our ghost remembers is a cryptic poem.
“Seal of a king” makes me think of a signet ring, but nothing jumps out at me for the others.

Another thought…if “this is all you need for the first memory” is part of the poem…how does he know that? If you see him again before we work out this memory, it might be worth asking if this is like a gut feeling thing or if something is helping him give this to us.

I was also thinking, we’ve only “meet” one magiqal king right…King Ojorad from The Minnying? Could this be another tie back to that?

Edit: No offense to King Rabbit, but I’m getting the vibe it’s probably not to do with him… 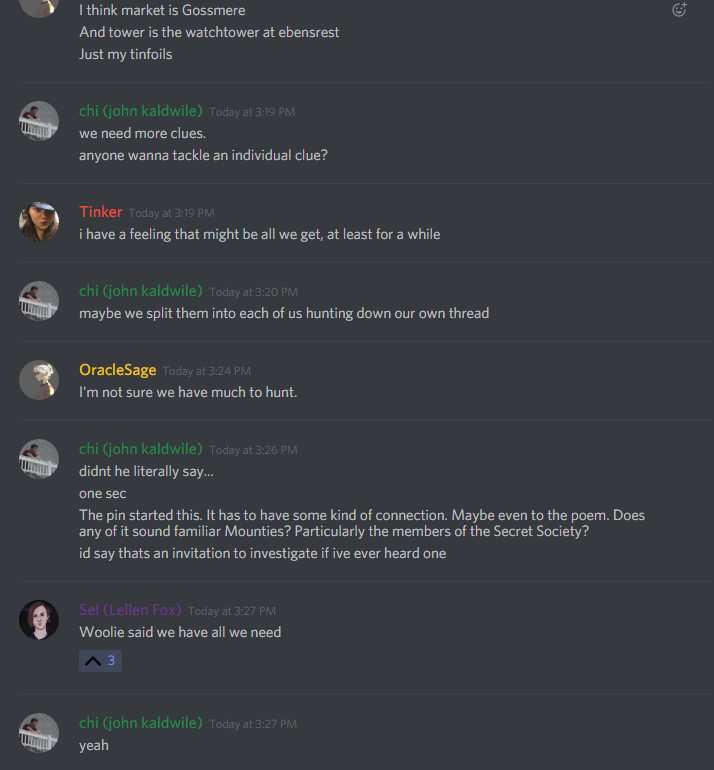 a copy of our current correspondence for posterity sake

A union of time… that reminds me of when I was interacting with te lighthouse ghosts. We were all in the same time despite being ages apart… did the other guilds experience something like this too?

I’m taking a minute, this is a lot to process. I always knew it was a bloody war but… I mean, all the guild leaders, or in this case house leaders, wiped out like that in a single stroke, like candles blown out by a storm… I’m angry. I’m sad, and I’m honestly scared.
I knew the Silver were cold and cruel, but we had no way of knowing they were… So impossibly inhuman.

As for the puzzle, it says that’s what we need, perhaps we need to visit those places? Use them as a foci?

Since, as far as we know there aren’t any courthouses in Neithernor, it may be safe to assume these locations are in our world. Unless… There might be one at Ebensrest?

Maybe it’s something that happened in both worlds?

So, some bigger picture thoughts. The following text was contained in that carbon copy letter from Warner Green that Sabes found in the storage room with the Secret Society pins:

…when the time comes, the pins may call on you to find what they have been asked to find…

So if these are clues to locations, either here or in Neithernor…maybe we need to go there to find the Memory? Like Sabes getting the notification when he went to the storage unit? That phrase he found was part of the Ghost’s memory.

W: There are… shards left in my new memory. Small pieces that don’t belong there. I think they might belong to you and your friends.

If these memories belong to us, then these are things we’ve already seen. (Robert: Stating the obvious since…forever)

Some of these quotes kinda fit things we did in fragments.

And then he started reciting a poem and I hope to God I got it right.

A clock - There were a lot of clocks in fragment2.

A courthouse - I’m sure we’ve seen a bunch of courhouses.

Two wheels in the sea - Huh, no idea. A bicylce in the water? A paddleboat?

A tower - We’ve also seen a lot of towers

A cemetery - Fragment 2 ended in a cemetary

The seal of a king - Ojorad’s mask in fragment 4? shrug

A carpenter’s cure - This one intrigues me the most. It’s so oddly specific, but i can’t think of any carpenters we’ve met.

A union of time - The time donut returns! Okay it was more a mobius strip.

A Romanesque lure - No idea

A brush with the law - Marty breaking into one of any possible installations for us maybe? Cole trying to break a book out of a library?

Just the first thing that occured to me, maybe it helps. I’ll keep pondering.

For some reason this quote reminds of the myth of merlin? It seems very Balimora to me.
My first instinct is that we need to visit these places with the pins, maybe?

My first instinct is that we need to visit these places with the pins, maybe?

Oh, these could be places we have to visit with the pins. i like it!

If thats the case my town has a giant courthouse in our downtown, I will be there Wednesday… I could bring the pin and we could just… see what happens? lol

Catch me at home, carefully setting my pin atop some woodworking tools and waiting for something to happen…