18. The Secret Society: Down to City Hall Station

Originally published at: The Secret Society - Down to City Hall Station - Ackerly Green

The word “haunted” has a negative connotation, but that’s how it felt down there. Not in a horror movie way, more like a lot has passed below those arches over the centuries, and some things never left.

No, nothing out of the ordinary happened while I was in City Hall Station that would help us further along the events taking place with what we’ve come to call the Secret Society.

It all happened after I left.

The strange sounds in the videos I took, the notification I received nearly 24 hours later on my phone, (one word, “betrayer”) and the picture at the end of this video… the one I found in my camera roll last night.

The one I didn’t take. Yeah. So something was definitely down there. But I don’t know what, and honestly, I don’t know if it has anything to do with us.

I dreamed about visiting that place for so long. It certainly didn’t disappoint, but we’ve also seen and experienced a lot of wondrous things together over the past few years. Why I still feel so drawn to that place, now almost three days later, I don’t know. Maybe I always will. That photo, the one I didn’t take, it’s a prized possession now. That’s Saberlane there, the one I lost to the storm, still looking up.

No word yet from Woolie, but we’re waiting. I’m worried though. He may be gone already. We’ll keep you all posted.

There’s magiq there, weither of our doing or not. Magiq follows wonder, and that place is full of it. I’m so glad you got to see it, and if even for a second feel that connection to everything before. A stunning video too, gives me tingles just watching!

A question asked perhaps too late. Did you happen to bring the journal Catherine found with you?

I did (I always try to remember “WW @Robert D?”) and nothing changed. @Catherine and I are in the office today, completely unable to be productive while we wait for any kind of sign that might tell us what to do next.

Is a Woolie grounding hex out of the question?

So… @Catherine and I have have pored over the old “AG” posts that were appearing on Ackerly Green’s Instagram account back in the day. Nothing ever came of them, they were just photos of old books with observations about them, signed “A.G.”

We ended up archiving them because we’d save all the images and captions, and the Mounties had as well.

You know what we didn’t do?

We didn’t check the comments. 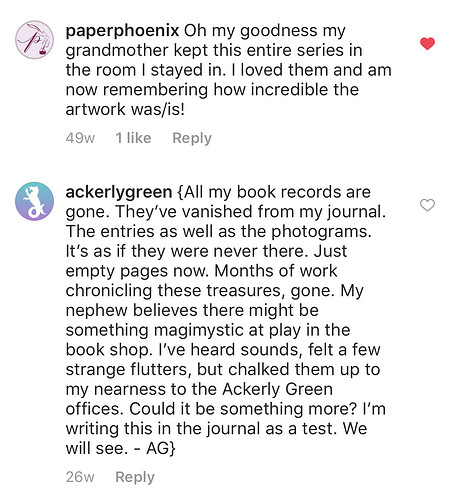 That one appeared 26 weeks ago. And this one six weeks later: 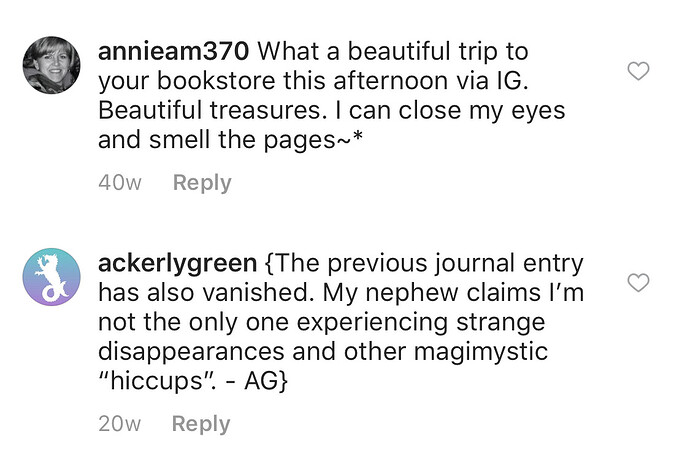 They appeared SIX MONTHS ago. So far, they’re the only two we found. We tried to “unarchive” the posts these were attributed to so you all could see, but the comments then disappeared (thanks to Catherine for taking screenshots.)

17.5. The Secret Society: Spell Discussion and Planning for Woolie

Evelyn Avis Green… AG? Maybe the AG that was posting to Instagram? Please tell me I’m not the only one thinking this?

But OMG, is this so cool!

She keeps referring to her nephew. Maybe she is (was? was never?) Sullivan’s Aunt?

I have to admit I’m way rusty on my Green family tree.

Edit: That would make her Warner’s (Deeds grandfather) unexpected sibling I guess?

a combining form occurring in loanwords from Greek, where it meant “something written,” “drawing” ( epigram; diagram ); on this model, used in the formation of compound words ( oscillogram ).

So, a photograph that’s somehow drawn onto paper? I’m leaning more and more to AG being from the Book of The Wild (am I way off base?), so a photogram is either A) What everyone called a photograph there, or B) It’s a magimystic way to take a photograph and “develop” it?

She (I’m assuming “she” I know) mentions that the photos that were posted on our Instagram account went missing from her journal, so the photos that appeared there were her “photograms”!

I just figured ‘photogram’ was their name for ‘instagram’. But then I’m pretty unimaginative.

So if Catherine writes in the journal do you reckon it’d send what ever she writes to AG?

I mean, that’s definitely an option, but I will say I’m hesitant to just go scribbling without a clear intent. It feels kind of sacred, like I’d be defiling it in some way? I don’t know, seems a little Riddle’s diary-esque too, and we all know how well that works out…

Maybe pencil so you can at least rub it out should we get nothing back? Also cause I’m not expecting any vanishing/appearing text like Harry Potter, lol

Ye let’s not risk you getting sucked into a journal

oh. OH. OHH! I might have the answer to the photogram thingy! Photogram - Wikipedia

this was a super vague topic in high school, for me, but i did actually work with them a little. Perhaps some of the pages are light sensitive in that journal? Try looking at them under darkness or blacklight! Basically, a photogram was an image made from putting a bunch of assorted junk on light sensitive photo paper, usually built for a 35mm camera, and then rapidly exposing it to red or white light and immediately developing it. The longer you left it to develop, the more artifacts and exposure in the image. This is EXTREMELY interesting, i never expected my knowledge of this to ever come in handy.

Ah, right, the photograms in her journal went missing…? hm. Uh, that sounds rather interesting. Perhaps those images are still around? Trying having a search. They might be negatives of some rather unique antiquities.

and one final thing, so we mounties have the resource for the future… Making a Photogram by ILFORD Photo - YouTube Heres how you make em. simple, right?

I don’t know what’s going on for sure. I need to run home and grab some stuff but then I’m coming right back to the office. I can’t explain it, I just–

Ok sorry, starting at the beginning.

Like an hour ago I was in a rush to pack up and get out of the office when in my hurry, I grabbed AG’s journal by the cover and when it fell open I saw something on one of the pages that definitely wasn’t there before. It’s writing, but it’s hard to read. It’s fuzzy and wavering, almost like it’s underwater. The words don’t show up when I take pics of the pages but before they got fuzzier and finally disappeared, I transcribed this:

“It seems others with magimystic sensitivities have experienced strange occurrences of late, though my nephew isn’t convinced it’s necessarily limited to those with knowledge of the Arcanum, only that they’re more keen to accept disappearing objects and strange sounds as magimystic. But there have been enough observed and recorded instances in a small amount of time that it’s impossible now to believe it’s not a coincidence.

Fina said I was calling out in my sleep last night, something about [there was no word there, or there was a blur, almost like it was “deeper”, more obscured, than the other words]. I confided that strange things have been happening, and I showed her the journal. She said writing has been so important to me these past few years, to help me work through things, and suggested I should keep writing my journals and book records, even if they disappear. The point, she explained in her never-ending wisdom, isn’t necessarily to preserve, but to express. Things don’t have to exist forever to have mattered–”

I called @Saberlane and we both agreed that the proximity to AGP might be triggering it. He already went home because he “has a family” and “needs to acknowledge their existence at some point” so it’s just me here right now. I don’t know if more entries are going to appear, but I’m going home for a hot sec because it’s getting late and I’m starving but then I’m coming right back with some snacks and comfier clothes to see what I can make of this.

Wish me luck, I think I might be here a while.

Well, this definitely reinforces what we thought about the Instagram posts - it seems that they’re her book records, which honestly makes a lot of sense given the content of those original posts.

So are these posts disappearing through a hole between our Book and the Book of The Wild, along with other objects? What else has come through, and what caused that link to exist, here and now, of all times? I think the biggest issue is what else could come through, given the chance. Also, who is Fina? What’s the Arcanum? I really don’t know. Any ideas?

what caused that link to exist, here and now, of all times?

I’ve been thinking about this quite a bit. What’s different about AGP or the community lately? Some thoughts:

Those are the only major changes I can think of. Anything else? Anything seemingly unconnected I’m overlooking?

W: There are… shards left in my new memory. Small pieces that don’t belong there. I think they might belong to you and your friends.

Perhaps this is one of those bits of someone else that got caught in Woolie’s memories?

We also had the Vernal/Spring Equinox yesterday, which could have some magiqal significance.