So, while I was gone, the company we’re renting office space from decided that they needed our current space for their own employees. The good news is we now have a slightly bigger office and a window. The bad news is basically everything else. I was freaking out that we were maybe going to somehow lose Woolie or this connection to the other AGP.

We finally moved into the new office and hadn’t heard anything for about a week and a half, until this morning. Catherine wasn’t in the office yet, but Woolie came back and he was fragmented, and fading, whereas before he had become more… corporeal before? Now he was back to the way he was when he first showed up. Whatever seems to be happening with the Instagram account and the sounds in the office also seems to be happening to Woolie. Like we’re losing our connection to him, or his connection to us. He was originally drawn to the office because he said there was some kind of light in it. Maybe that light’s disappearing. Like magiq?

He was talking but I could only hear about a quarter of it. He was telling me about his first steps into Neithernor. He said he was welcomed with open arms by these people who had taken these ancient ruins and turned them into beautiful homes for the six guilds that he’d come to learn about, almost like club houses. Rotting wood and crumbling stone had been covered with tapestries, cloths, and furniture, and there were tents set up all over the place. It was like these grown-ups were living some wonderful childlike adventure. He saw people going and coming through doors to our world, people learning magic, people sitting around campfires, telling stories, detailing adventures they had in this world. He met groups of people gathered under massive trees reading old books and parchments, working together to try and learn unknown languages and decipher strange codes. He said he finally felt like he was home. I’m not positive, and it may be because I’m biased, but I think he said he was an Ebenguard. How he describes Neithernor, and the new houses, the path of wool, all sounded extraordinary. I have no idea why I can’t knock in but maybe it’s just not my thing, yeah? Anyway, I’ve been pretty preoccupied.

After about ten minutes he disappeared mid-sentence and didn’t come back. I stayed until the early hours of the morning just in case, and just when I was about to leave, on the chalkboard, I found one phrase, written in what I assume is his handwriting…

That was it. It doesn’t seem like it’s a lot to go on. I mean, what the hell is happening? The Book of Briars has been inexplicably delayed, whatever connection we had to the other Ackerly Green and Woolie seems to be dissolving. Any ideas what we should do?

As for the AG package, no word yet from China but I’ve been following up regularly. I’ll let you know as soon as I know something.

Well there’s a fun chestnut of a conspiracy theory that the Statue of Liberty is based on Apollo or Helios. (Walk not too far down that path before you get into the illuminati/alien/lucifer connections.)

Also I just learned the Colossus of Rhodes was based on the god Helios, and I suppose of you look at it from the point of view of a family of giant statues staring out over bodies of water then the Colussus and the Statue could be sibilings.

Or maybe it just means @Helios needs to call his family more often.

Maybe an AGP field trip is in order?

Robert, I was just about to mention Helios (you have no idea how many solar deities I went through before I got to Helios).

Okay, so I just did some digging. Apparently, one of Selene’s atributes in art, alongside her veil and lunar crown, is a torch. Two images show such just on wikipedia: 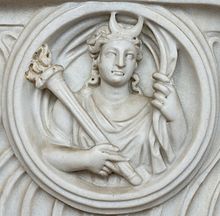 In Greek mythology, Selene (/sɪˈliːniː/; Ancient Greek: Σελήνη [selɛ̌ːnɛː] "Moon") is the goddess of the Moon. She is the daughter of the Titans Hyperion and Theia and sister of the sun god Helios and Eos, goddess of the dawn. She drives her moon chariot across the heavens. Several lovers are attributed to her in various myths, including Zeus, Pan, and the mortal Endymion. In classical times, Selene was often identified with Artemis, much as her brother, Helios, was identified with Apollo. Sel Th...

and for details on Helios: Helios, also Helius (/ˈhiːlioʊs/; Ancient Greek: Ἥλιος Hēlios; Latinized as Helius; Ἠέλιος in Homeric Greek), in ancient Greek religion and myth, is the god and personification of the Sun, often depicted in art with a radiant crown and driving a horse-drawn chariot through the sky. He was a guardian of oaths and also the god of sight. Though Helios was a relatively minor deity in Classical Greece, his worship grew more prominent in late antiquity thanks to his identification with several major s...

“When the sun god finds one sister who stills hold aloft her fire”
I have a feeling the wording I italicized is important (unless it’s part of Woolie fading), since it would otherwise be “still holds.” 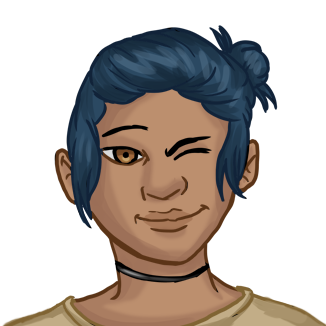 Unfortunately all I have is brothers.
On your note about the Statue of Liberty, it does have a sister statue called the Île aux Cygnes that the US gift France in 1889 to celebrate the French Revolution.

Also, the Metropolitan Museum of Art has a statue of the sun God Apollo’s sister Artemis holding two torches.:
https://www.metmuseum.org/art/collection/search/242294
Unfortunately, it’s not currently on display.

Sorry to hear about the stressful office move, Saber! Glad to hear its all sorted now, though.

As for Woolie, I’m a little worried about his sudden deterioration from our world; sounds too much like Lachmann for comfort… I wonder if there is someway to help, or better make use of our time with him while he’s here? As of right now he’s our only “living” connection to the ones who walked before us, that and the guild ghosts which have been appearing in Neithernor. His depiction of Neithernor really made my day because I think, I hope at least, one day it can be like that again, and I absolutely can’t wait for that day. Until then, sounds like we have a lot of work to do!

So do we think this clue is about Helios, or for @Helios?

And we’re looking for a haunted lighthouse…which could be said to be something that holds aloft fire.

Oh, @Helios. Are there any lighthouses near you with some various of sister / woman / haunted / etc in the name?

Failing that. Any notable statues of women? I forget where you live right now or I’d start googling.

Unfortunately no lighthouses around since I’m back in Colorado. I’ll definitely hunt around for statues. If you want to look too, I’m in Fort Collins.

I tried looking at public art in Helios’ area (and briefly at museums to see if anything stuck out).
This is the closest to something relevant I could find: https://www.fcgov.com/artspublic/gallery/solarpath

That isn’t to say there isn’t other, more related things, but I didn’t check all the concepts for the murals in progress.

There is a mini Statue of Liberty in Fort Collins City Park. 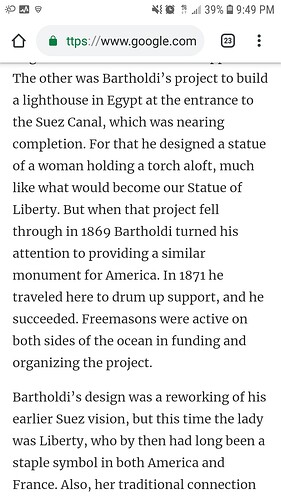 The idea for the statue was originally going to be a lighthouse.

TIN FOIL FOR EVERYONE

(Also, earlier in the article the screenshot’s from it mentioned that Artemis was loosely related to the Greek equivalent of Libertas)

Woah! I had no idea that existed, this is awesome. I’ll head over to it soon and if that doesn’t work I could check it out again when it’s a reasonable time of day. Astounding research as always @Ashburn!

You were absolutely right Ashburn! I’ll try to make this short since my hands are frozen and I’m about to pass out.

My journey to find the park was pretty average (except for the fact I forgot my jacket and made a terrible judgment call on how cold it could get). When I was getting close to the statue itself, I pulled out my phone to load the AG app and as my phone sprang to life the streetlight I was passing under burnt out which was super creepy, but I felt that it was a sign that the statue would be a hit.
It came into view and with only one other light nearby, I could only just make out the cold outline of the statue, which wasn’t an issue since the app quickly reacted! The notification that appeared read:

Thanks for the research again Ashburn, I’m gonna sleep for a long while now!

That’s awesome! I’m so glad it wasn’t a dud.

With what came up when you got there, it sounds like we’re getting the clues one at a time now. I’d imagine keeping the messages shorter might make it easier for our ghostie friend to stay in touch.

So, my first inclination is that the “star-eyed witch” is the reference to the Mountie in question?

If that’s the case, @Nimueh and @Viviane came to mind first (unless there are others of us with witchy names?).

It could also be @OracleSage

The Mississippi does look awfully squiggly…

I’m gonna agree with Ash on this and say Oracle. The Misissippi is most definately very twisty, and could be described as crooked in places. Did a quick map check on the river near me, just to be safe, not really crooked.

Took a bit of searching, but I knew there was something that could fit the bill for a witchy lady… Thank you Judas Chalice Librarian movie