10 Thoughts I Had After Finishing LOTR for the First Time

Last July, I started reading the Lord of the Rings trilogy for the very first time. I had read The Hobbit when I was much younger, so I was vaguely familiar with Bilbo, Gollum, and “my Precioussss,” but I somehow managed to go my entire adult life without ever reading any of the subsequent books, watching the movies, or having any idea what they were about beyond a sketchy idea of Elijah Wood as Frodo and Gandalf’s “You shall not pass!”

Cue last year’s Bukbangs, when I decided I wanted to spend the summer reading exclusively fantasy novels, which included the entire LOTR trilogy and revisiting some of my favorite Narnia books as well.

…It took a little longer than intended, but I’ve finally finished The Return of the King.

So! Without further ado, here are ten thoughts I have about LOTR upon finishing as a first-time, completely fresh reader/viewer. If you haven’t finished the series yet and, like me, have somehow managed to escape being spoiled, beware!! There are spoilers.

Also, just for fun: Men of Middle Earth as bad ex-boyfriends who ruined your life.

I can answer some of your questions, if you want.
For instance the Eagles, much like Gandalf himself, are from Valinor and are influenced the same way that Gandalf is by the One Ring.
Alongside that, the Council wanted the Fellowship to be as careful and sneaky as possible in getting to Mordor and the 9 of them had a hard enough time staying hidden as is. The Eagles, being massive, would have been found out much sooner and have come under attack by the Ringwraths on their flying worms.

And I do agree with the walking. The Hobbit by itself takes a full year from start to finish while the LOTR only takes 6 months.

According to some apocrypha (JRRT’s letters), they moved because they preferred farming over the wild forests of the Ents. They were wiped out after having taught men agriculture during the war with Morgoth, The OG Dark Spirit (Sauron’s inspiration for being a baddie); he burned the land they’d settled.

Okay, fair. Subtlety was never exactly the Fellowships’s strong suit to begin with

the Eagles, much like Gandalf himself, are from Valinor and are influenced the same way that Gandalf is by the One Ring

I also did not think of it that way! Gandalf always seemed so larger than life that it was easy to forget he was also vulnerable, as would be other all-powerful flying beings 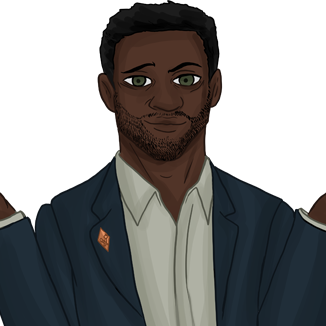 But still, awfully convenient there at the end!!

They were wiped out after having taught men agriculture during the war with Morgoth, The OG Dark Spirit (Sauron’s inspiration for being a baddie); he burned the land they’d settled.

Noooo this is not the answer I want 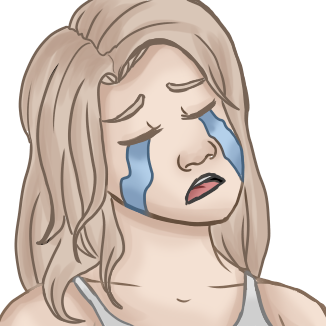 Also RE: The Eagles 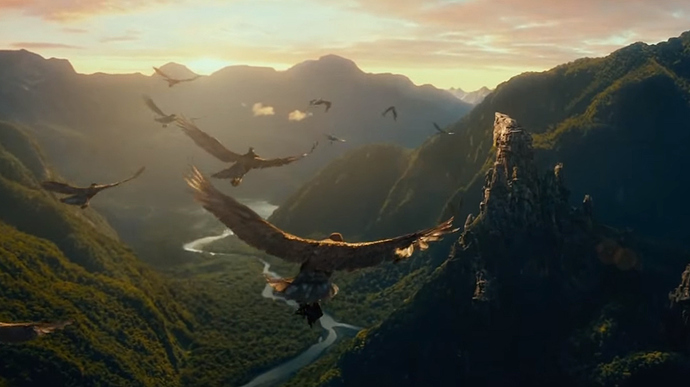 Whether you're Tolkien obsessed, a casual Lord of the Rings fan, or even if you've only seen the films a handful of times, you're bound to have heard, and possibly participated in, the debate regarding the Great Eagles of Manwë and their...

But yeah, thought this added another element on top of Fives explanation. They were really proud creatures and only helped Gandalf because he did them a solid one time, but they weren’t stoked about any of it.

This is a great article and also made me feel validated that so many people clearly had the same thoughts!! 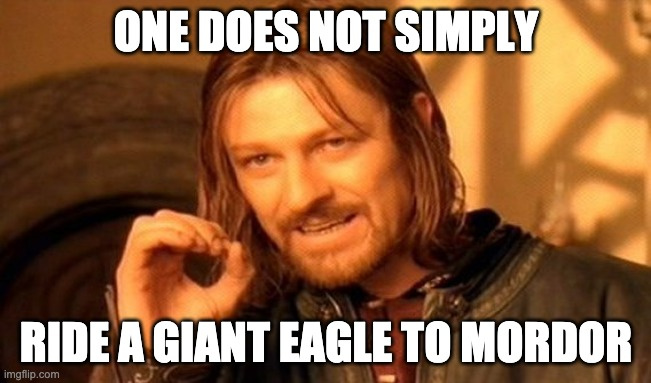 Did I do it right

Yes! You aren’t the first and won’t be the last to question that!

JKR low-key ripped off a bunch of concepts?

Honestly, most fantasy authors have been ripping off JRRT since LotR was published

I want to go back!! / I would gladly take a ridiculously long walk with any of the Fellowship

Depending on how ridiculously long you want to “walk,” can I recommend “Exploring the Lord of the Rings?” You can listen to the backlog on YouTube or podcast or tune in to the weekly live broadcasts.

every single name-drop was actually cataloged and explained somewhere

And those notes are merely what the publishers let him add in!

Where are all my ladies at???

Most of it was that he was writing a mythos based in Anglo-Saxon traditions, which rarely featured women. Women were rarely the heroes of the traditions he studied and also weren’t the heroes of the time he started these stories (many reaching back into the 20s when he was in the trenches of WWI).

Something that helped me come to terms with the lack of women is that the few women in the story are the men’s betters - Eowyn is the only person who can defeat the Witch King, Galadriel & Arwen both not only outrank the humans, but outrank almost everyone in Middle-earth. The two real-life women in JRRT’s life - mom and wife - were basically goddesses to him and there is discussion in the Tolkien studies world that a contributing factor to why he couldn’t write women is because they could not compare to the real women in his life.

And those notes are merely what the publishers let him add in!

This is a slightly terrifying thought. His poor publishers.

The two real-life women in JRRT’s life - mom and wife - were basically goddesses to him and there is discussion in the Tolkien studies world that a contributing factor to why he couldn’t write women is because they could not compare to the real women in his life.

This is very sweet (even if I still kind of want to say “come on, dude!”) but that also totally makes sense about the traditional framework he was working with. And I do also take heart in the fact that all of the women are so far out of everyone’s league!

I’d just love to see some kind of female-centric reimagining of Middle Earth. How does Arwen spend her thousands of years before Aragorn shows up?? What does Rosie Cotton do with her days in the Shire?? Honestly, I’d read a whole book about Eowyn training to be a lady-knight. They’re such great characters and I imagine them all as autonomous creatures with such vibrant lives that not even Tolkien knows what to do with them.

And I’ll definitely be checking out that podcast, thank you!!

Not that I actually trust anyone to do it justice, but it would be awesome to see LOTR get a Mists of Avalon - type treatment!

I desperately want to the post the Epic Rap Battle between JRRT and GRRM. It’s so funny, but it’s got language and don’t know if it would be allowed.

Good call on the language, but oh my goodness, that was too funny!!

JKR low-key ripped off a bunch of concepts?

Welllll, if you read some of the earlier Dungeons and Dragons materials, you can see they high-key ripped it right off. Early D&D was essentially LOTR choose-your-own-adventure fanfic, in a way.

As for the development of the languages … that was quite intentional. Tolkien was a linguist—a professor an Anglo-Saxon at Oxford. These are actual languages he uses, like Quenya, with full syntax and structure. This is what inspired Klingon and Dothraki, really.

This is one of my favorite websites, Omniglot, with a page for Tengwar (the alphabet) for Quenya (the language): https://www.omniglot.com/conscripts/tengwar.htm. You can see the huge variety of other fictional languages listed there too. But Tolkien was a trailblazer in that regard.

Aaaah I’ve been wondering how you liked your first trip to Arda!

I do have a bone to pick about the absence of women except as icons of otherworldly beauty, like Galadriel, who seems to exist to inspire courage and devotion in the men.

Of all the characters Tolkien created, Galadriel may actually be among the most complicated and I love her! He was revising her history up until his death, and a few conflicting versions exist. This makes me very interested for the upcoming Amazon series, in which she is reportedly a more integral player.

LotR Galadriel is brief a snapshot of a character who is incalculably old (literally way older than the sun and moon), at the absolute peak of her wisdom. It only gives us her conclusion. Her youth was…uh…less “otherworldly sorceress of the woods” and more desire for dominion and conquest, and in LotR we see the actual moment when she fully masters that side of herself. The Silmarillion is intimidating, but it gives Galadriel so much context!

Still, there are certainly a lot of Victorian views to unpack with Tolkien’s women, along with the strong influence of his faith and personal experience, not to mention the mythological archetypes he was pulling from. Eowyn is a surprisingly forward character for being written in the 1930s/40s, and probably has the clearest psychological arc of anyone other than Frodo.

How does Arwen spend her thousands of years before Aragorn shows up??

I have a headcannon that Arwen is an accomplished craftswoman of many arts, and I think it would have been brilliant if they’d had her be the one to forge Anduril in the films.

Since folks are recommending podcasts I highly recommend Corey Olsen’s various recordings. He taught a whole Tolkien class one year and posted the lectures for free listening.

If you want more Middle-earth feels but aren’t up to The Silmarillion just yet, I would strongly suggest a fanfiction of all things: “Don’t Panic!”, and its sequel. It takes the “girl falls into Middle-earth” trope that was popular in the days of the films and makes it lore accurate and also intensely emotional. Major characters from the book are involved, of course, but it also delves into some side characters to incredible effect. I’ve re-read them several times now. It’s funny and tragic and touching and wonderful.

I agree with @eternalhearts and @Sorrel’s points about women in LOTR.

The biggest thing with all of Tolkein’s stuff is that he wrote it with the perspective of it being a translation of personal work. So if you can wrap your head around that, there’s plenty of things such as some intentional language choices that lend itself to this (referring to creatures as forms of ‘demons’ because that would be the easiest parallel for us in this time to understand these big terrifying creatures from the depths. Or how the names of the Hobbits are actually translations to more common sounding names in our language; pretty sure there’s an appendix about this)

When we consider the way in which he chose to tell these stories - with the context of a translator with inherent bias of the time - it makes total sense to me that there was a choice to only include women relevant to the grander tale or women who were incredibly powerful. Especially if a man was writing it in the early to mid 1900’s, of course they would think it wasn’t deemed “necessary” to include women in the background or include their narrative.

(Not down for it, but life under the patriarchy)

Overall, TLOR is a feminist work so I’m not too upset by it, but yes I also would love more females and to learn their tales.

I may have done an assignment in high school related to this.

We had to write a news article, and I’d done one about the eagles getting pissed that people kept asking them for rides everywhere after helping them out at the end. “We’re not a taxi service!”

This makes me very interested for the upcoming Amazon series, in which she is reportedly a more integral player.

I just learned about this series today and I am so excited!! I finished watching Return of the King over the weekend and I’m so ready for more.

Eowyn is a surprisingly forward character for being written in the 1930s/40s, and probably has the clearest psychological arc of anyone other than Frodo.

OFFICIALLY my favorite. I screamed.